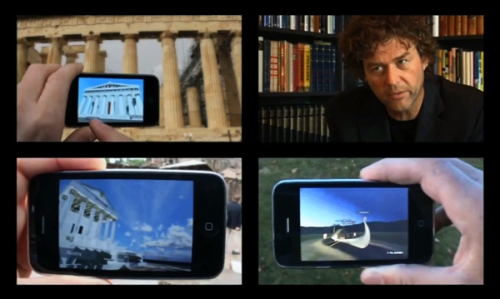 Kudos to the developers of a really great iPhone app called Sitsim (short for “situated simulation”), which is being supervised by Gunnar Liestøl, professor at the University of Oslo (above, upper right). The app will deliver augmented reality on mobile devices at historically important sites all around the world. Embedded below is a demonstration video, which includes the funeral ceremony of Julius Caesar as part of the augmented reality on the Forum Romanum in Rome:

The app is still in its beta testing phase, and so is the content: Here the same errors were made that we already criticized in the case of the History Channel documentary Death Masks (see the final paragraph in this article).

First of all, it was a tropaeum, a Roman victory cross and a prop from the Dionysian rituals, to which Caesar’s wax effigy was fastened, not a “pole”, as the Sitsim narrator wrongfully asserts. Secondly, it is illogical to assume that the effigy was bound to the tropaeum with its arms pointing downward, as if Caesar, man and god, had been represented like a common crucified criminal. Of course, if one presupposes a pole instead of a cruciform tropaeum, then there is no other way to fasten a body, but the sources do mention the tropaeum. (Even the app’s situated simulation clearly shows the crossbeam, so there is also an internal discrepancy in the Sitsim beta presentation.)

Furthermore, we have already shown (17 sqq.) that it is feasible that Caesar’s effigy was fastened to the tropaeum with its arms outstretched. Thirdly there is the chronological issue: It is now clear that Caesar’s funeral proceeded not on 18 March, as the Sitsim app assumes, but that all the ancient historiographers were correct, who unequivocally imply that the ceremony occured on 17 March, the day of the Liberalia.

But all in all, once finished this will be a valuable mobile application. However, some content would need to be restricted, depending on the age of the user. Parents surely would not want their children to see Romulus being torn to pieces by the senators on the Forum, when all they want is a nice holiday in Rome. 😉