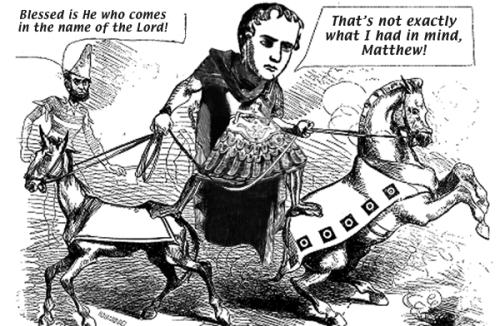 We’ve read lots of interpretations of Jesus’ triumphant entry into the City. We’ve read for instance that it was modeled on Roman imperial triumphs. At first glance this would seem like a false notion because Jesus clearly does not enter the city on a chariot, although all other properties do fit the picture, for example the palm branches, the spread garments, the decorated mount, the procession, the triumphant cry, the praising of both the triumphator and the highest god, as well as the entry into the city and into the temple. But it’s a fact that in two of the gospels Jesus enters the city on a young and unbacked horse, a foal, a πωλοc, “whereon never man sat”. That’s right, not on a donkey. Mark and Luke are quite clear about that. Matthew had added his usual midrash and needed to align his Gospel with the LXX, and—so it would seem—he was forced to introduce a second equid for the Old Testament prophecy to make any sense, a donkey, but couldn’t lose the original foal, which results in Jesus riding into the City on two equids at the same time, a foal and a donkey: πωλοc and ονοc. (John revised it further, merged both properties and only speaks of a young donkey, an “ass colt”.) But is that really what the evangelists did? And where’s the connection to Julius Caesar, if the Gospel is really a diegetic transposition of the historical sources on Caesar’s Civil War?

The properties of the triumph are the same (v.i.) and are also found in the sources on Caesar’s triumphs. But why a young, unbacked horse? And why a donkey? First of all it needs to be noted that Caesar also celebrated a so-called ovatio, a minor triumph, during which the triumphator normally entered the city on foot. Caesar actually reformed the ovatio and for the first time entered the City on horseback, as a form of ephiphany (Latin: adventus). This means explicitly that Jesus’ triumphant entry into the city on horseback was a novelty introduced by Julius Caesar. Caesar even had a young horse fostered, an unbacked horse that was to be ridden by him for the first time. His ovatio occured after his last Civil War campaign in Hispania, and it is the famous episode where Caesar, the pontifex maximus (chief priest of the Roman religion) stated: “I am not king, I am Caesar”, which we also find in John’s Gospel, albeit slightly displaced in the Passion narrative, where the chief priest exclaims: “We have no king, but Caesar”.

So a lot of the attributes, properties and sayings from Julius Caesar’s triumphs and ovatio are found in the Gospel, especially during what we now celebrate as Palm Sunday as part of the Holy Week. But where does the donkey come in? Is it only a foreign body introduced from the LXX as part of the redactional layer? At first glance there is no donkey in the Caesarian sources, only the unbacked (young) horse and the triumph. But what is the main attribute of the equid shortly before Christ’s triumph? It is “tied” outside of the city. In the Caesarian sources we find Caesar’s legate Gaius Asinius Pollio waiting outside of the city before the triumph. The evangelists obviously mistook the original Latin term legatus for ligatus:

And here we also find the solution to our horse/donkey mystery: It is simply a mistranslation of the legate’s name Asinius Pollio, which happened during the transpositional process. Mark’s and Luke’s manuscripts of the Caesarian sources only read Pollio, which resulted in the “foal” or “colt”, whereas John’s (and most probably also Matthew’s) Roman manuscripts rendered his full name, which resulted in “ass” and “colt”:

The fact that both Caesar’s unbacked horse during his ovatio and Matthew’s LXX midrash fit the newly formed hypertextual rendition may have been just a coincidence, but it could also have enforced the transpositional outcome in the gospels.

It should also be noted that the donkey could have become the equid of choice due to the Augustan sondergut that was added to the later gospels. Gaius Octavius, Caesar’s nephew and heir, was adopted by Caesar and became the new Caesar as well as Divi filius, “Son of God”. Many of his stories are also found as secondary transposed material in the New Testament, for example the birth legends, the adoption, the Resurrection and emergence of the young Caesar, the battles of Philippi and Actium, or the proscriptions of the second triumvirate. Before the Battle of Actium the young Caesar had met an old man and his donkey, whose name was “Victory”. He saw this incident as a good omen, and after the victorious battle he erected a statue of the man and his animal. Together with the ox and the capricorn the donkey remained one of his prominent animal symbols and could have enforced the transition from Caesar’s horse to the donkey in the later gospels.

2 Comments to “Jesus and Caesar: Brief notes on Palm Sunday”