Astigi quod Iulienses. The mystery of Astigi and the palm of Munda

END_OF_DOCUMENT_TOKEN_TO_BE_REPLACED

The Ascensions of Christ and Caesar

A picture is worth a thousand words, so today we will rather look at the iconography…

A famous depiction of Christ’s Ascension is the Christus Helios, a late third century Roman ceiling mosaic, which is said to show Jesus as the sun god Helios (Sol or Sol Invictus) riding to heaven in his chariot. Since the historical Jesus was Julius Caesar, we find the iconographical predecessor in the first century BCE, a relief depicting the apotheosis and ascension of Caesar as Divus Iulius (“God Julius”), riding to heaven in his chariot. The main characteristics are exactly the same: god, chariot, wheel, horses with raised forelegs, plants, and the general theme of ascension. Here are the images:

END_OF_DOCUMENT_TOKEN_TO_BE_REPLACED

The Spanish journal for ancient archaeology Revista de Arqueología has reprinted an abridged version of the article “Orfeo Báquico – La Cruz Desaparecida”, originally published in 2009 in the theological journal Isidorianum 18 (35): 179–217. Here’s the abstract taken from the English version “Orpheos Bakkikos — The Missing Cross”:

END_OF_DOCUMENT_TOKEN_TO_BE_REPLACED 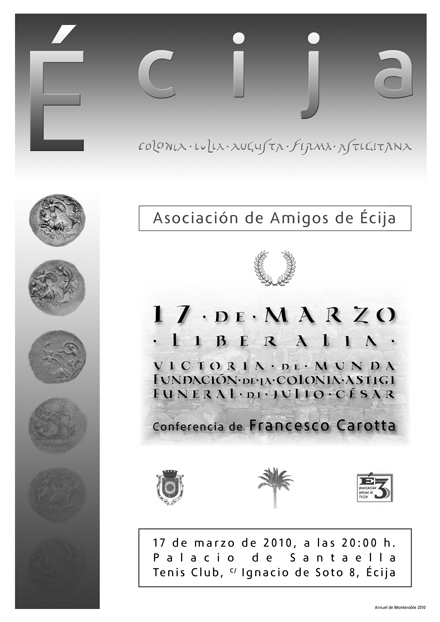 The Resurrection of Julius Caesar
on the day of the Liberalia

On Friday, 17 March 44 BCE, the day of the Liberalia, the festival of Liber Pater (Bacchus/Dionysus), Julius Caesar received his state funeral and resurrected as god by the will of the people. A wax effigy of his slain body was presented, raised above the bier, at the exact spot where a cruciform tropaeum stood, and was then rotated for the attending crowd.

The image above shows a reconstruction of Caesar’s simulacrum on the cross from the available archaeological sources. In the context of the Liberalia this cross was not (as usually) only a Roman victory cross, but especially needs to be seen as a liturgical prop commonly found in the rituals of Dionysian festivals. The tropaeum is taken from one of the many Caesarian coins that display Caesar’s tropaea, while the effigy is from a denarius by Caesar’s moneyer Buca, a coin that represented the imagery used at Caesar’s funeral, including his effigy as the legendary shepherd/king Endymion.

Caesar’s real body was cremated by the people in an improvised manner during the same ceremony on the Forum Romanum. In the gospels, which are a diegetic transposition of the historical sources on Caesar’s Civil War, Caesar’s cremation was interpreted as Christ’s Crucifixion, and all of the hypotextual properties are still found in the Passion narrative, for example the Latin cremare (CREMO; “to cremate”), which was understood as the Greek term κρεμαω (κρεμάω; “to hang from”, “to suspend”; Christian: “to crucify”), a striking accordance that was also noted (vice versa) by Church Father Augustine in Quaest. Num. 4.33.5, where he insinuated Christ’s cremation and specifically explained the Resurrection as an apotheosis by fire:

For more information, especially on the scientific background and sources, see the following three articles and book excerpts:

Below is a camera snapshot series of a sequence from the documentary feature film Death Masks, which originally aired on History HD in 2009. It shows a 3D reconstruction of Caesar’s wax effigy on the cross during his funeral, however with several omissions and errors, most notably the arms that are not extended, but bound to the body and to the vertical stem, as if Caesar were simply a common criminal being crucified.